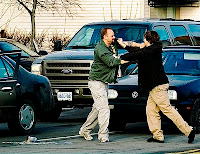 Myth 1 - Size matters
Size is a natural advantage since its intimidating. But the advantage of size in actual street fight is over-rated.
Natural reflex, aggression, nimbleness and hitting the vulnerable spots are the key in a emotionally intensive confrontation.
But, AVOID going on the ground grappling with a bigger guy, because he can dominate with superior mass.
Myth 2 - Technique matters
Its highly improbable that a technique learnt inside a dojo can be applied with 100% effectiveness, in a sudden fight.  One will be under adrenalin infused stress because of the unpredictable and dynamic nature of an ugly confrontation.
Its the reflexive adaptability of the technique which will be most natural and least contrived.
Myth 3 - Cool head will prevail
3 things matter in street fight - Aggression, aggression and more aggression.
As combat tested military and police officers have observed “Combat is 90% Attitude & 10% Technique"
Look aggressive, Act aggressive, feel aggressive..  and be spatially aware of the environment.
Myth 4 - "Everything happened SO suddenly!"
Things did NOT turn ugly suddenly. Its just that your antenna was not up and all the signals, of a situation becoming uglier, were ignored.
The concept of AOI (Ability, Opportunity, and Intent) has to be understood, especially if you are in a profession or lifestyle where exposure to violence is highly probable.
Another factor is the behaviour of the aggressor which indicates attack is imminent. Some of the common indicators are -
Thats why in KravMaga training, apart from techniques, lots of importance is given to sharpening the natural reflex, becoming aggressive, handling others' aggression and being spatially aware of the environment.
Remember the first rule of Krav-Maga?
NO RULES
.. since in the street there are NO rules
S.SREERAM
Co-ordinator / Instructor
Chennai Chapter, Krav Maga (IKMF) India
Mobile: 93400 06600
Email-  kravmaga.chennai@gmail.com
Chennai Group -  http://groups.google.co.in/group/kravmaga-chennai
www.kravmagachennai.com
...........................................................................
"So that one may walk in peace" ... Imi Lichtenfeld, Founder of KravMaga
KRAVMAGA BLOG -  http://kravmaga-chennai.blogspot.com/
LINKED IN -  http://in.linkedin.com/in/ksr960
FACEBOOK - http://bit.ly/KravMagaChennai
YOUTUBE - http://www.youtube.com/user/KravMagaSreeRam
GOOGLE PROFILE - http://www.google.com/profiles/ksr960
TWEET - @kravMagaSreeRam
aikido criminal behaviour kalari karate class Krav maga kravmaga martial arts road rage self defence street fight