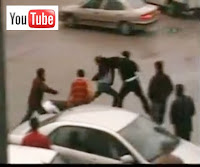 Remember these critical points in a street fight -
* Keep moving and don't present a stationary target.
* Don't be in the comfort zone of the attacker/s - keep changing Range, Direction.
* Don't assume there is only one aggressor. Always assume he has got assistance. So scanning your blind side is very critical.
* Since you are assuming your attacker is going to get assistance from friends, you always try to keep the confrontation as short as possible; which prepares you for the next assault.
* For your life's sake don't try fancy stuff - especially intricate locks and high kicks. They are for movies.
* Don't get trapped in the middle of a group.. keep pushing to the periphery of group
* Keep you senses and eyes open for exit routes
* Don't panic.. Even if you don't feel brave, Fake aggression
* If you fall down, try to get up fast.
* If you are down in the midst of a gang, cover your head with arms and just roll up like a snail covering vital organs.
* And use whatever object comes within your reach - chairs, bottles, stones, pen

There is a good representation of this street smartness in this video -
http://www.youtube.com/watch?v=k8EEN5RkltY
fitness chennai Krav maga kravmaga MUGGERS multiple attackers self defense chennai sreeram street fight WOMAN SELF DEFENSE

The Dynamics of Police encounters - Part 2
The background of encountered criminals - Venkatesh Pannaiyar This was an encounter which resulted in the transfer of the charismatic Vijayakumar IPS, the then Commissioner of Police, Chennai. Read on to understand how the police fight crime with one arm tied behind their back. Also how the media, which cant shed its caste and community prejudices, packed off an efficient officer from the state itself, in spite of delivering whatever assignment given to him.
VENKATESH PANNAIYAR - THE BACKGROUND
The diminutive and nattily dressed Venkatesh Pannaiyar won’t physically fit the prevalent image of a don.
But he is a product of generations of caste feud plaguing Southern TamilNadu. His family is from Moolakarai near Tuiticorin; an area with the dubious reputation for making country bombs and gun running.
Venkatesh's uncle, grandfather - important elders of their community have been murdered by Dalits, when he was a boy. Venkatesh, grew up as a…
Read more