The police & fake encounters - Tip of the iceberg

After the recent police encounter in TamilNadu, furious debates are happening in every media channel; in some of which I also participated.
Instead of analysing this specific encounter and getting into shallow arguments, I want to talk on the larger aspects like -

How does the public view police?

Sheep dog and wolf analogy - According to Geoff Thompson , Police are the 'Sheep dog'. which protects the 'Innocent herd of Sheep". The criminal is akin to the "Wolf"
When there is no threat; the sheep hate the presence of the sheep-dog... He is bossing around and intimidating... The moment the Wolf appears on the scene, the sheep loudly bleat for the sheep-dog to come to their rescue.
In essence, a citizen recognizes the utility of police only when he is under threat. Rest of the time he dislikes any interaction with khaki.
In fact the movies takes great delight in ridiculing police as comical bums or criticizing them as corrupt inhuman robots. On the other extreme are the Vijaykanth type superhuman police, mouthing punch dialogues while catching bullets fired at him.


Why the public perspective of police is so negatively twisted.

The ills of Indian police

The police to Public ratio is abysmal in India. On top of it, many police personnel are not utilized for law-enforcement. They are errand boys to officers' families. One senior officer was telling me he had 18 men working in his house when he was a district SP!
Law and Order police are pulled from regular duty for VIP bandobast. One sees VIP convoys with scores of policemen apart from the hundreds lining the road. Like many government departments the resources are used for their own benefit first. So understaffing is a major issue.
Under-staffing pre-supposes over-working. Most of the police personnel suffer from fatigue. On top of physical fatigue, they suffer from mental stress due to abuse by superiors, no interaction with family, sense of frustration caused by corruption. Add to it alcohol abuse, lack of fitness programs and exposure to elements.
A recipe for inefficiency!

How equipped / skilled are our police?

In Tamil a popular observation is " போக்கத்தவனுக்கு போலீஸ் வேலை .. வக்கத்தவனுக்கு வாத்தியார் வேலை . “ “Police job is for the troublesome who lack education and skills ... Teaching job is for the educated without any skills". Even though this is not completely true, there is some validity when we look at the kind of people taking up police and teacher jobs.
A police man is not recruited on the basis of IQ, but on physical attributes. After he joins police the training regimen successfully snuffs out any proactive intelligence he had; he is conditioned to obey orders whether he likes it or not.
Then he is posted in a station. In a short period he realizes the system is corrupt and any values he may harbor will only cause friction with his superiors and colleagues. He faces the choice “Either be part of the system and claim your share of the spoils or get sidelined to a punishment post."

A classic case is Computerization, which is carried out in a crude manner; without any thoughts on integration or work-flow management. Once I saw 400 new PCs in one office, with only pre-installed MS-office and all operating as stand-alones!
Most of the officers are afraid of experimenting with technology, because if their attempt fails they stand accountable. So, putting aside any fresh initiatives, they opt for no-brainer decisions, which have safe precedents. No wonder, most of the modernization funds given to police is spent on buying vehicles and building new offices.
Even if an officer shows pro-active initiative, he may not remain long enough in that post to see it through. Constant transfers ordered by short-sighted superiors and political bosses frustrate any attempt to build a sustainable and efficient process. The replacing officer who comes to the post will have different ideas and priorities.
The net result is, Indian police's infrastructure, especially technology is mostly cosmetic and under-utilized.

Talking about training of recruits, the basic training is out-dated. Once on the job, there are no systemic attempts to update skills. Even the sporadic training exercises are perfunctory and the results are not compared with the objectives. It’s mostly on paper.
Since I try to help the police in un-armed combat and cyber-crime prevention, I am constantly surprised by the administrative apathy. I poured out my frustration to a senior officer," Your department has just 2 problems - too much of power and too much of ignorance. It’s a bad combination! “. He nodded with a sympathetic smile.

This is the overall pathetic scenario. Having this in mind let’s look at ‘encounter’ deaths 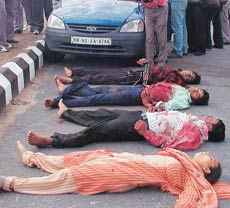 Encounters are political decisions. They are not just police decisions.
Even if the police want an encounter, it cannot happen without the tacit approval of the political bosses.
I also noticed that police will turn a blind eye and tolerate crimes which happen in closed rooms, away from the eye of the larger public. They will even demand a share in the spoils. But when a crime happens in full public glare threatening their credibility, police swing into action to regain their image.
The human rights supporters constantly demand the police to leave it to the judiciary. How naive! An encounter cannot happen without taking into confidence local judiciary, politicians, community leaders and in many cases even the media.
A police officer is NOT carrying out an encounter, since he is a sadomasochistic pervert. He is forced to do that due to various compulsions, which may be beyond law and order issues.
Killing a life in cold blood is not an easy decision and it is taken reluctantly under extreme duress.
The officer is also putting his career on the block; he knows if the political bosses are replaced, he will be the scapegoat.


What the public wants and how it can be realized?

The problem for the police is that the criminal is hidden amongst the public, whom he is protecting. He has to weed the criminal out and substantiate his actions to the critical scrutiny of media fed public.
In contrast the army has an easier job, since the enemy is well identified. Eliminating an enemy is not subject to constant public debate. Concepts like patriotism also make army killings actually look good and they are hailed as 'Saviors of the nation.'
The police job is mostly ‘Control’... Not 'offensive". He is expected to use force with great restraint. They are advised to use force in proportionate to threat. Who will measure the threat and response in a crisis!