July 22, 2012
After the Guwahati incident, wherein a girl was sexually molested by around 30 men, I have been getting calls from concerned parents and IT/BPO companies which employ women;  all enquiring about self-defense courses.  Suddenly here was an ugly reminder of the safety of women on Indian streets.

“Oh..come on..it’s the same all over the world. .tell me..if the girl is walking outside a bar at that time, what does she expect?!”  shrugged one middle aged man, while another waved the whole the thing away with a generic dismissal , “She is a victim of the angrezi pub culture”
But the truth is more ugly and accurate, as these facts below point out.
The security of woman in India is amongst the lowest, globally ( Source - http://www.womanstats.org)

The more startling fact is, even war-torn Somalia is rated a better country in terms of safety of women! India is at the bottom 4 along with Afghanistan, Congo and Pakistan. (Source -www.trust.org)

In India , Andhra and Bengal seem to be the worst states for woman. All the inference drawn below are based on published reports of NCRB on “Crime against women”
A quick look of the molestation and eve-teasing statistics of the top metros, reveal Chennai is comparatively a safer city for women.

In total numbers, the predictable bad-boy is of course Delhi, followed by Mumbai.  But the ugly story is revealed in the smaller cities like Bhopal, Indore, Lucknow and especially Vijayawada.
What’s wrong with small town India?! 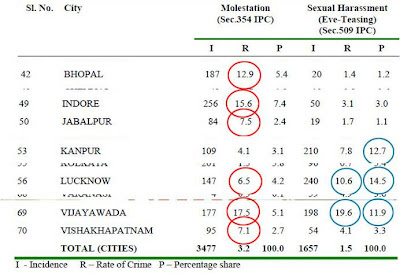 The summary of the pathetic India story on “crime against women” is captured by the graph below.
In 10 years since 2000, the total incidents of crime has grown 50 fold! If one tries to blame this on the burgeoning population, its futile; because the figure on the rate of crime against woman (number of incidents in a lakh of population) also shows a steady upward slant. 30 times increase in 10 years!
Today Crime against women cases form 10% of the total IPC cases in India !