February 26, 2012
The Dynamics of Police encounters - Part 2
The background of encountered criminals - Venkatesh Pannaiyar
This was an encounter which resulted in the transfer of the charismatic Vijayakumar IPS, the then Commissioner of Police, Chennai. Read on to understand how the police fight crime with one arm tied behind their back. Also how the media, which cant shed its caste and community prejudices, packed off an efficient officer from the state itself, in spite of delivering whatever assignment given to him.

The diminutive and nattily dressed Venkatesh Pannaiyar won’t physically fit the prevalent image of a don.
But he is a product of generations of caste feud plaguing Southern TamilNadu. His family is from Moolakarai near Tuiticorin; an area with the dubious reputation for making country bombs and gun running.
Venkatesh's uncle, grandfather - important elders of their community have been murdered by Dalits, when he was a boy. Venkatesh, grew up as a natural leader and rallied the youth to form Nadar Padhugapu Peravai (Organization for protection of Nadars). He also gained political clout by working for ADMK in the '96 elections, but gradually fell out of favour with the party leadership after his name was linked to extortion rackets.

THE CHENNAI CLEANUP DRIVE
When Vijayakumar took over as CoP in Dec 2001, organized crime was well entrenched in Chennai, thanks to the previous DMK government which encouraged the dons.
The present CoP Mr J K Tripathy was then Joint Commissioner. This team went on overdrive to eliminate these gangs. They mapped the gangs’ members and analyzed their network.
The police were following up leads on various extortions and gun running. The name of Venkatesh Pannaiyar cropped up and when they probed further it was a surprise to find his network had deep tentacles in Daravi, Mumbai and even Bihar which was the source of small arms; even though Venkatesh Pannaiyar was an unknown entity outside Tuticorin and surrounding districts.
The well known dons in Chennai at that time were Punk Kumar, Vellai Ravi, Ayodhyakuppam Veeramani, Appu (of Kanchi Sankara mutt murder fame); all of them had vacated Chennai in a hurry once the Vijayakumar & J K Tripathy duo started the cleanup drive.

THE TAJ HOTEL INCIDENT
Venakatesh Pannaiyar was going around in Chennai doing only high-value extortions and kept a low profile; except for an incident which was an aberration.
One night at the Taj hotel to protect a couple from a group harassing them, Venkatesh took out his pistol. This created panic in the crowded bar but the hotel was forced to hush it up, due to the intervention of some police officers.

THE ENCOUNTER
By September of 2003, the special cell in CCB (Central Crime Branch) which dealt with organized crime had built a bulky dossier on Venkatesh; his extortion rackets and arms running marked him as a don, with an unrivalled geographical reach.
After continuous surveillance the CCB decided to pick him up for enquiry, related to an extortion complaint in Kilpauk station.
The team led from the front by the DC himself, knocked the door of his apartment, near Loyola College on the road to Mahalingapuram. It was almost early morning and probably Venkatesh was groggy after a bout of drinking. Once he saw the police at the door he started firing. The police team had no other alternative than to fire back. 36 years old Venkatesh Pannaiyar died and two of his accomplices were held.

THE COMMUNITY BACK LASH
Till Pannayar's encounter, the media has elevated Vijayakumar as a hero who brought law and order back in Chennai; in spite of the 7 encounters in 2 years. There was even a rumour floating around that he may become Home-Secretary, even though he was an IPS officer and not an IAS cadre.
The major Tamil newspapers, especially Thinakaran and Thinathanthi led the unrelenting attack on Chennai police. They wouldn’t settle for anything less than the CoP’s transfer and a CBI enquiry.

THE HINDU EPISODE
At that time Tamilnadu assembly speaker ordered the arrest of The Hindu journalists, which the city police messed up. So the disappointed CM scored 2 hits with one stone. Vijayakumar was transferred to STF to chase forest brigand Veerappan and the powerful Nadar media baying for Vijayakumar's scalp was silenced.

VENKATESH PANNAIYAR BECOMES A NADAR LEGEND
See this video to get an inkling of the nature of caste worship, eulogizing Venkatesh Pannaiyar - NADAR SINGHAM 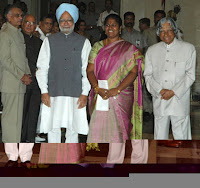